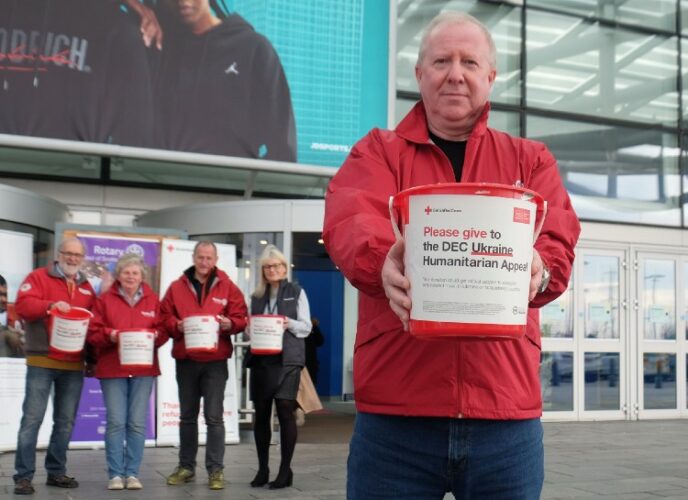 Shoppers at the Braehead Centre are being asked to do their bit to help the people of Ukraine who are suffering during the Russian bombardment of their cities and towns.

The team at the shopping mall has invited the Rotary Club of Renfrew to use the centre as a venue for bucket collections on behalf of the British Red Cross for three days this weekend.

Volunteers from Rotary will be stationed at three entrances and exits – at the Marks and Spencer end of the centre, the opposite entrance and exit near Primark and outside Starbucks in the upper mall on Friday, Saturday and Sunday, March 11, 12 and 13.

They will be collecting cash donations for the British Red Cross Ukraine Crisis Appeal to help refugees fleeing the war-torn country and those staying behind in Ukraine.

The British Red Cross is part of the UK’s Disasters Emergency Committee, which unites 15 member charities who are experts in humanitarian aid and specialists in different areas of disaster response.

And also help families stay in contact with each other, educate people on the risks of explosives, as well as repair vital infrastructure, homes, healthcare centres, schools and community centres

Gary Louttit, chairperson of Renfrew Rotary’s international committee said: “From the images, we see on our television screens every night, the Russian invasion of Ukraine has led to a massive humanitarian crisis.

“The British Red Cross Appeal is vital to getting aid to the people who need it most and as Rotarians, it is our duty to live up to our motto of Service Above Self.

“We are one of the world’s biggest humanitarian organisations and along with many other people up and down the country, we’re doing all we can to support the innocent victims of war in Ukraine.”

Lydia Brown, Braehead’s community development manager added: “Everyone is looking for ways to help in the Ukrainian crisis and one way Braehead can play its part is by giving Renfrew Rotary and the British Red Cross access to the many thousands of people who will come to Braehead this weekend.

“I hope our visitors will give as much as they can to the appeal when they see the Rotarians with their collection buckets at the entrances and exits to the centre.”

Categories: Community News
Previous Back Next
We use cookies on our website to give you the most relevant experience by remembering your preferences and repeat visits. By clicking “Accept All”, you consent to the use of ALL the cookies. However, you may visit "Cookie Settings" to provide a controlled consent.
Read our Privacy PolicyRead our Cookie Policy
Manage Settings Reject All Accept All
Manage consent