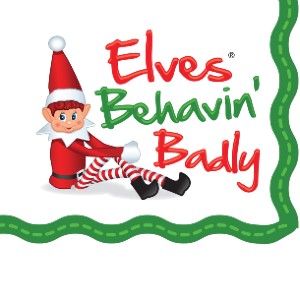 They’ll be decorating the tree, playing festive games and getting everyone in the Christmas spirit with some carols at intervals throughout the day!

You won’t want to miss it!

This free event which will run throughout the day will include some fun Elvin activities as well as meet & greet session.

This is a free event, however, spaces are limited and on a first come first-served basis.

Elfie was once a gold star employee at Santa’s North Pole workshop but became disillusioned after an extended stint editing the naughty and nice list. Increasingly Elfie began to realise that he was far more interested in being naughty than being nice, so he set up a rebellious underground elf organisation called the EBB or ‘Elves Behavin’ Badly’.

The group met each Thursday afternoon at the workshop carpark to chew candy whilst planning mischievous stunts and jokes,  which would often involve stealing cookies and harassing reindeer. This is where Elfie met Elvie – a stunning 30cm tall lady elf who was instantly attracted to Elfie’s large pointy ears and permanently fixed smile. They spent their evenings getting into trouble, joyriding Santa’s sleigh and gift-wrapping snowmen.

Santa put up with the high jinx for a few hundred years but eventually became exasperated with the group after one particularly naughty elf, named Elven, snuck into his room and shaved off his glorious beard on the night before Christmas. From then on Santa had the elves put under heavy observation. He invented the Elf Surveillance System™ and doubled down on the naughty list with a new zero tolerance attitude.

After an extended probation period in Elf Training Academy, Elfie and the other elves were let off the hook and are now annually dispatched across the globe to report back new additions to the naughty and nice list. So, each Christmas these reformed “ex-naughty” elves enter the homes of families where they report naughty children to Santa. However, the truth is they do all this whilst also being really, really naughty themselves. Sneaky little elves!

Find out more about Elves Behavin’ Badly on their website here

Categories: News Uncategorised
Previous Back Next
We use cookies on our website to give you the most relevant experience by remembering your preferences and repeat visits. By clicking “Accept All”, you consent to the use of ALL the cookies. However, you may visit "Cookie Settings" to provide a controlled consent.
Read our Privacy PolicyRead our Cookie Policy
Manage Settings Reject All Accept All
Manage consent